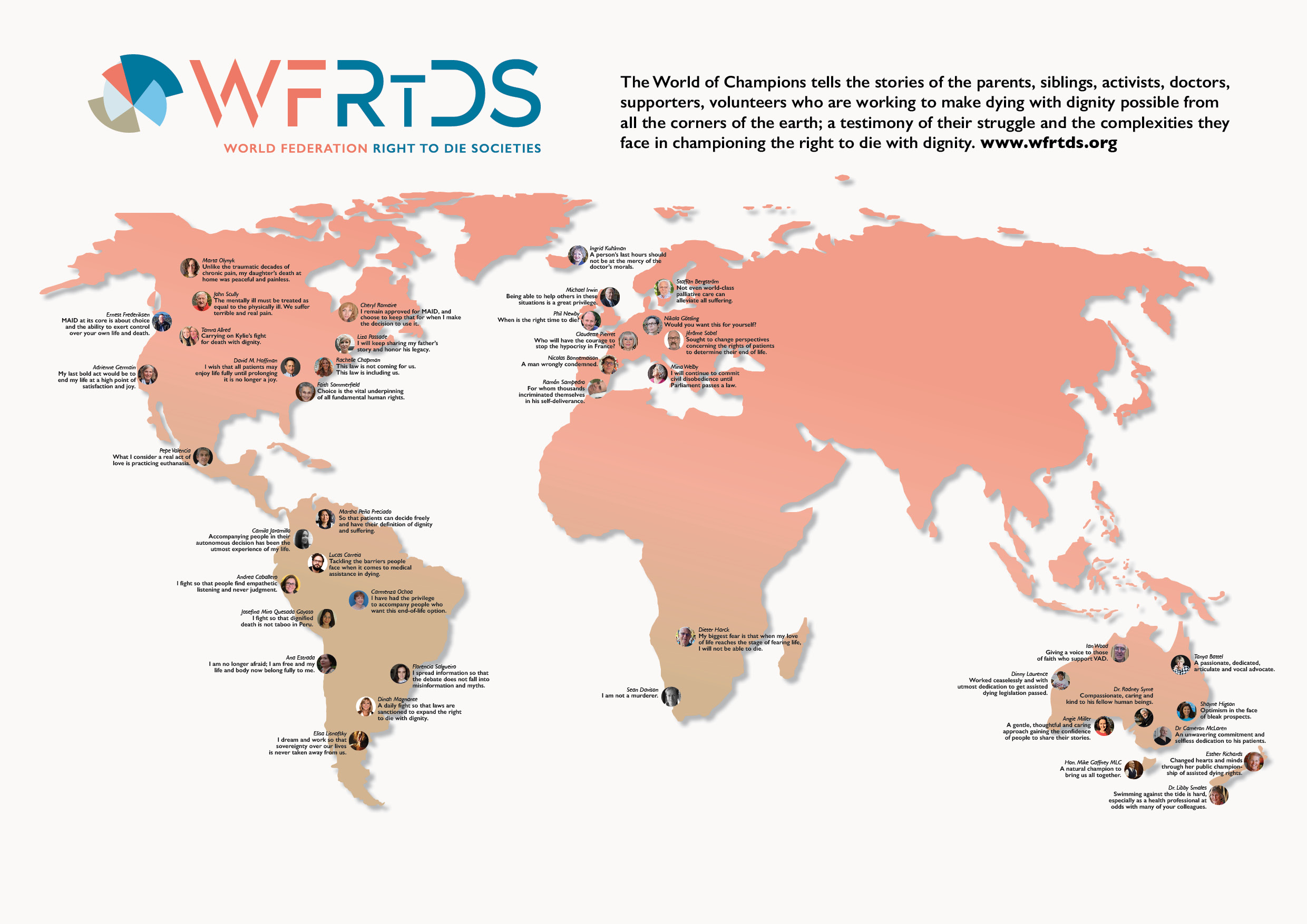 There are many forces that differentiate us in the world: politics, religion, beliefs, to name only a few. One thing that unites us is the desire to die with dignity. Asunción Alvarez, President of the World Federation of Right to Die Societies said, “Around the globe, many people  fight to make a death with dignity possible for themselves and those they love. It is these people that we would like to put in the spotlight for World Right to Die Day 2022; the Champions, who through their support, activism, fighting, writing, willpower, vision and strength, are advocating to make right to die legislation possible all over the world.”

At 18.30 local time on November 2nd, Voluntary Assisted Dying South Australia (VADSA) posted the World of Champions map on their website as did all 58 World Federation of Right to Die Societies spread through 30 countries across six continents.

Rob Jonquière, Executive Director said, “The World of Champions tells the stories of the parents, children, siblings, activists, doctors, supporters and volunteers who are working to make dying with dignity possible from all the corners of the earth. It is a testimony of their struggle and the complexities they face in championing the right to die with dignity. In some areas, the map is empty, and while there are certainly Champions in each of these countries, their efforts are shrouded in silence without right to die societies to support their cause and tell their story. We hope that they will join us in time.”

According to VADSA President, Frances Coombe, selecting just one Champion to represent the South Australian campaign to legalise voluntary assisted dying was a challenge. “Our organisation has been advocating for law reform since 1983 with 16 attempts to pass VAD bills before the successful passage of our VAD law in 2021,” said Ms Coombe. “So many individuals have made enormous contributions over the past forty years but we are very proud to have Angie Miller as our Champion.

Like so many advocates, Angie Miller’s involvement followed the difficult cancer death of her father in 2018. Angie supported her father after his diagnosis, initially with regular visits from her home 2000 kms away, and then every day in his last months. Being part of her father’s harrowing last months, Angie became a powerful advocate for voluntary assisted dying in the successful 2021 campaign in South Australia. In 2020 Angie established a Facebook page - A Peaceful End, creating a community of interest with people across the state, sharing their stories and generating momentum for a VAD law.

Angie travelled all over South Australia to address meetings, knowing there was widespread but silent regional support for VAD, and that Members of Parliament who had previously opposed VAD held regional seats. Social media enabled contact with people who previous campaigns had not reached. Angie spent hours every day communicating with and supporting people through her Facebook page. People sharing stories of unnecessary suffering of loved ones at the end of their life. Angie’s gentle, thoughtful and caring approach was instrumental in gaining the confidence of people to share their stories and join the campaign, many taking new leadership roles in their local community. Angie’s passion was relentless. All while managing paid employment and a young family. Angie knew that if a Voluntary Assisted Dying law had existed, her father’s suffering could have been avoided.

At the biennial World Federation Conference of Right to Die Societies in Toronto, Canada, WFRtDS  President Asunción Alvarez unveiled the World of Champions map at a special presentation on November 2.

Join us in celebrating the unity and commitment of Champions worldwide by reading and sharing their stories as well as joining us in supporting their advocacy.