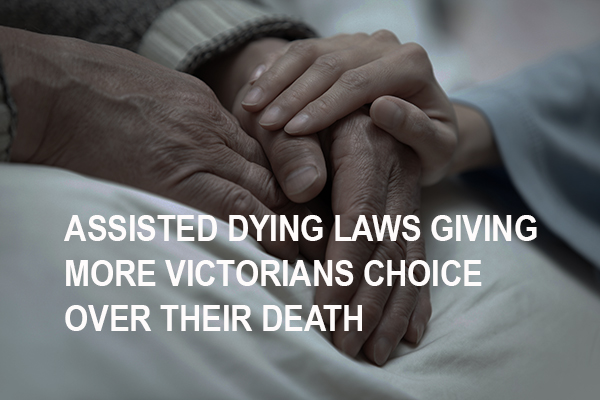 Just over one year since its implementation, voluntary assisted dying laws are giving Victorians suffering with a terminal illness greater choice over the timing and manner of their death.

The latest report shows that of the 231 permits issued, 124 Victorians suffering with a terminal illness had accessed the laws in the last 12 months, affording them compassionate care at the end of their life.

The report also shows the widespread need for the legislation, with 38 per cent of applications from people living in regional Victoria. Similarly, applications were received from Victorians across a spectrum of ages – from 32 to 100 – with an average age of 71 years.

Of those who have died, 78 per cent had a cancer diagnosis, 15 per cent had a neurodegenerative disease like motor neurone disease (MND), and seven per cent had other untreatable diseases including pulmonary fibrosis, cardiomyopathy or chronic obstructive pulmonary disease.

And reflecting the rapid decline of people experiencing many of these illnesses, half of all applicants proceeded from their first to last request within 19 days. Most permits were then issued within two days.

The number of medical practitioners trained and registered to support voluntary assisted dying increased by 30 per cent from the first six months, with 37 per cent located outside metropolitan Melbourne.

“This review shows that the system is working as it should – with 68 rigorous safeguards in place, making our model the most conservative system in the world,” said Minister for Health Jenny Mikakos.

According to the report many people – including some family members who were initially opposed to voluntary assisted dying – expressed gratitude that they were able to say goodbye to their loved ones.

“It was a beautiful, peaceful death. Was absolutely a pleasant and calm process which gave me so much relief to see her go so serenely.” – Contact person

The report shows that one application was deemed non-compliant. Although the applicant was fully eligible to access the scheme – and demonstrating the strict level of oversight – the Board’s review process identified an administrative error with the paperwork completed by a medical practitioner.

Ensuring that the scheme continues to protect patients and their families, the matter has been referred to the Australian Health Practitioner Regulation Agency for review and any follow-up action.

The independent Board has also used the review to repeat its calls to reform Commonwealth laws that effectively prevent Telehealth being used to discuss voluntary assisted dying.

This has proven to be a barrier for accessing voluntary assisted dying, particularly for regional patients or those too ill to attend an appointment in person. The coronavirus pandemic has further highlighted these access issues, prompting the Board to again call for change to the Commonwealth law.

For further information see the ‘Report of operations January–June 2020’