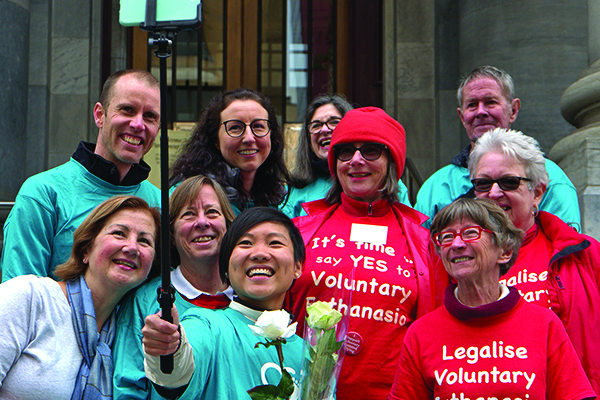 To honour her late mother Mareia Teh, 27 year old Belinda Teh has walked across sections of a 4,500 km route from Melbourne to her home town of Perth. The impetus was the image of her mother suffering terribly in her final hours. The horrendous end to Mareia Teh’s life came just two months after she was diagnosed with terminal breast cancer that had metastasised into her spine where a large tumour grew so large that it shattered her vertebrae. Belinda’s walk, assisted by Go Gentle Australia and led by Andrew Denton, aimed to inspire changes to end-of-life laws in Australia.

Belinda was farewelled from Melbourne by Victorian Premier Daniel Andrews. Her SA route took her through Coonalpyn, Tailem Bend, Murray Bridge, Mt Barker, Mylor and Stirling and ended in Adelaide on June 20th. SAVES and other advocacy group representatives and members of the public walked in solidarity with Belinda from South Tce to Parliament House steps where she was greeted by SAVES president Frances Coombe and other society members, and Kiki Paul CEO Go Gentle Australia. Belinda met with Premier Steven Marshall and stressed the need for VAD legislation. Her 70 day walk ended at Parliament House in Perth on Tuesday 6th August where she was greeted by WA Premier Mark McGowan and Health Minister Roger Cook. Local residents had the opportunity to meet Belinda during each of her stops. She said that she was buoyed by their support, but also disheartened to have met so many people with shared experiences. She will continue to advocate for VAD law reform.