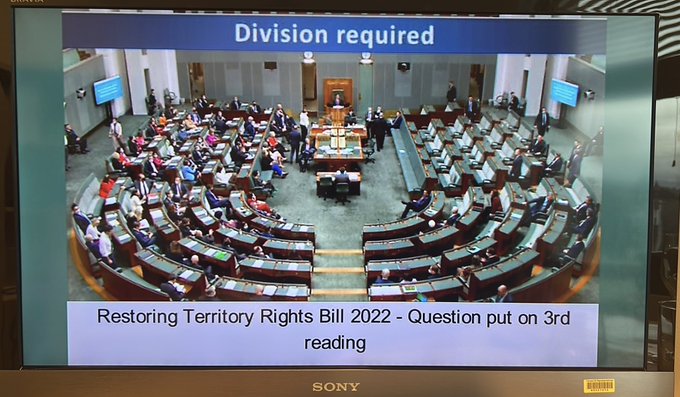 The ACT and NT are one step away from having the same rights as the states to debate Voluntary Assisted Dying. At 9.03 on Wednesday, August 3, the House of Representatives overwhelmingly passed the Restoring Territory Rights Bill, 99 for and 37 against. The Bill now goes to the Senate where one of the sponsors of the Bill, Labor’s Alicia Payne, Member for Canberra, says she is “somewhat optimistic” about its chance of passing.

Co-sponsor of the Restoring Territory Rights Bill, Labor’s Luke Gosling OAM, Member for Solomon, the electorate around Darwin, tabled the Bill on August 1. Gosling is personally opposed to voluntary assisted dying and emphasised that the Bill was about giving Territory citizens and their Parliamentary representatives the same democratic right to debate legislation as Parliamentary representatives in the states.

Opponents of VAD had attempted to frame the debate as legalising VAD, with Gosling stating

"That [legalising assisted dying] is not what is at stake here. They are issues for the legislative assemblies to consult on, to debate and to decide."

All five territory MPs - including the ACT's David Smith and Andrew Leigh - spoke in support of the bill in the House of Representatives on Monday afternoon.

The Restoring Territory Rights Bill overturns the 25 year old legislation known as ‘The Andrews Bill’ which had the effect of disallowing the Northern Territory Rights of the Terminally Ill Act (1995) introduced by then Chief Minister Marshall Perron. Under the Rights of the Terminally Ill Act four people were able to choose VAD in the NT before the Andrews Bill came into effect in 1996.

All six Australian states have passed VAD laws in the last five years, starting with Victoria in November 2017 and finishing with NSW in May 2022. VAD commenced in VIC in 2019 and WA in 2021, and will have commenced in all states by the end of 2023.