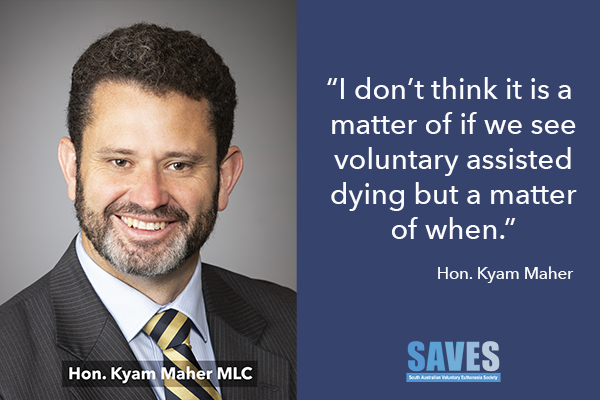 On Tuesday 17 November 2020, South Australian Labor MLC Hon. Kyam Maher gave notice in the Legislative Council that he would table a Voluntary Assisted Dying Bill on the next Private Members’ sitting day, which is Wednesday 25 November 2020.

It is expected that the same Bill will be tabled in the House of Assembly soon after.

This announcement comes at a time when the assisted dying movement is seeing great success and growing momentum.

Sept - Victoria released data on the first year of its VAD scheme demonstrating that this compassionate law is working safely and effectively.

Nov - Results of the NZ referendum on End of Life Choices showed that 65% of Kiwis wanted their VAD law to be enacted.

And most recently, Tasmania made history by becoming the first parliament in the world to pass assisted dying legislation with unanimous support in the upper house.

Now is the time for South Australians to ask their MPs to support assisted dying law reform.

To make this as simple as possible, SAVES have set up an online tool which allows a constituent to email your local MP as well as all your upper house MPs at the one time. Now is the time to ask them to support the South Australian Voluntary Assisted Dying Bill.